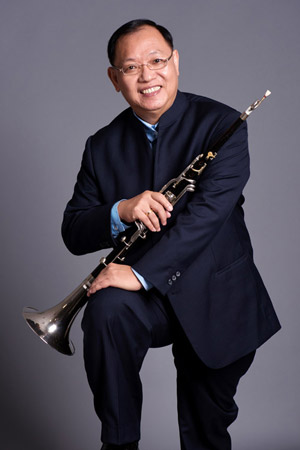 Boo Chin Kiah started learning Dizi under Chen Qun Nan and Phoon Yew Tian at the age of nine. During his secondary school days, he was very active in Chinese Orchestra. He was once a member of the Red Cross Association between 1977 to 1979.

In 1988, he went to China to study under the acknowledged master, Zhao Songting. Under his training, he fully mastered Dizi techniques and had good command of styles of both the Southern and Northern schools. Zhao Songting also gave him a gift of hand-made Dizi.

In 1991, Boo Chin Kiah presented a “Dizi and Erhu” solo concert together with Mrs. Ann Hong Mui, under the sponsorship of Teochew Clan Association. During the concert, he also performed Hulusi, Yudi and Paidi. The concert was greatly admired by the audiences

Book A Trial Lesson now
With the orchestra, he made concert tours to Malaysia, Thailand, Hong Kong, Japan, Brunei, USA, Korea, Beijing, Shanghai and Taiwan. To further his knowledge of music, he went to learn music theory from Mr. Qu Chun Quan. Later, he went on to study professional conducting course in Nanyang Academy of Fine Arts. Boo Chin Kiah has a good grasp of Dizi techniques and has mastered many wind instruments. He can take charge of Dizi, Xiao, Hulusi, Xun and Paidi. He is currently the conductor of many Secondary Schools and Community Clubs Chinese Orchestra.