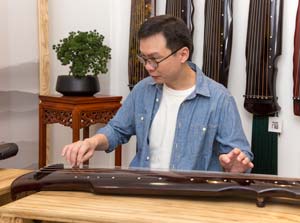 Kiak Ern had taken a strong interest in Chinese traditional culture since young. He specialized in Chinese Studies in his graduate and post-graduate years and it was those experiences that led him to appreciate the beauty of the culture. It was also through these experiences where he learnt about Guqin in the 1990s. He was lucky to have found the late Mr Boh Chit Hee as his first teacher in Singapore then.

Mr Boh’s humble and composed personality had a deep influence on Kiak Ern, who gradually understood the importance of self-cultivation in playing the instrument.  Moving forward, Kiak Ern sees Guqin as a symbol of the traditional culture, rather than just a mere musical instrument. During his years as a PhD student in Shanghai, he visited various Guqin masters and teachers in China, Hong Kong and Taiwan, whom he acquired skills and knowledge through lessons or pointers from. His passion for Guqin led him to further research into the history, aesthetics and concepts of the instrument. This deepened his understanding of the instrument and its music, which helps in his teaching.

Kiak Ern has taught Guqin for three years prior to joining Eight Tones Music School. He is enthusiastic to share his knowledge on not just the skills and techniques of Guqin, but most importantly the culture. He is most interested to explore how Guqin will be relevant in our modernized society and its connections with our daily lives.