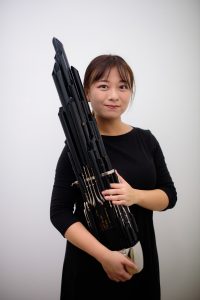 An aspiring multi-instrumentalist whose instrument specialties include the sheng, gamelan and piano, Tan Li Yun Jocelyn’s first foray into the realm of music begun when she picked up classical piano at the age of seven. Having piqued her interest in music performance, she subsequently joined her secondary school’s Chinese orchestra and picked up the sheng when she was thirteen. Jocelyn then went on to achieve a Distinction in Grade 8 sheng (2011), awarded by the National University of Singapore’s Centre For The Arts.

In 2010, Jocelyn joined the Singapore National Youth Chinese Orchestra, where she came under the tutelage of Singapore Chinese Orchestra’s resident sheng musician, Mr Ong Yi Horng, and was a recipient of the Singapore National Youth Chinese Orchestra’s Good Performance Award for 2011 and 2012. In 2013, she was appointed as the sheng principal player of the orchestra. With the orchestra, she has performed in numerous local concerts, as well as in Hsinchu, Taiwan (2013) and Beijing and Shanghai, China (2017). In 2017, Jocelyn was also the only delegate selected to perform as part of the ASEAN Youth Ensemble in Bangkok, Thailand, representing both the orchestra and country as a Singaporean musician. In 2011, Jocelyn joined Resonance – a Singaporean sheng ensemble. Together, the ensemble has put up numerous concerts and collaborative performances; with them, Jocelyn has performed in Hua Hin and Bangkok, Thailand (2014), represented Singapore at the ASEAN Traditional Music Festival held in Thanh Hoa, Vietnam (2015), and performed for the Hong Kong Sheng Association Launch Concert in Hong Kong (2016). In order to broaden her understanding of ethnic music, Jocelyn also joined Bronzage Gamelan – a gamelan ensemble based in Singapore – in 2013 as a gamelan musician. With them, Jocelyn has travelled to Indonesia to learn the art form, as well as performed on numerous local and international platforms, such as at the Hyderabad Literary Festival in Hyderabad, India (2016). In 2018, Jocelyn joined Reverberance – a local Chinese wind and percussion ensemble – as well, playing for a myriad of events and concerts with them. An avid performer, Jocelyn also regularly guest performs for various orchestras and ensembles.

Having graduated with a BA (Hons) in Music (Composition) at the LASALLE College of the Arts, Jocelyn’s works include Staticity (2013), a piece for four-hand piano which was selected for world premiere at the prestigious 32nd Asian Composers’ League Festival (2014) held in Yokohama, Japan, as well as Yuan (2014), a piece for fusion Chinese orchestra which was premiered at a benefit concert, “The New Tomorrow” (2015). In addition, she was commissioned to score for “Round”, an animation film by Samatha Seah for “Utter: Head Trips” (2015), a Singapore Writers’ Festival initiative supported by the National Arts Council. In March 2016, Jocelyn was one of few composers selected to participate in the Singapore Chinese Orchestra’s Composition Workshop, and had her work, Fleeting Impressions (2016), read by the orchestra. She was also commissioned to write a piece, Mood . Sketch (2017), by the St. Andrew’s Junior College Chinese Orchestra for their participation in the Singapore Youth Festival. A key takeaway from her years studying at LASALLE, Jocelyn enjoys creating works that incorporate ethnic instruments into non-traditional genres and configurations, as well as working with artists across varying disciplines. With this in mind, Jocelyn has collaborated with American poet Neal Hall, setting gamelan music to spoken word for an album release (2017); in addition, she created a collaborative piece pro://re.gif (2017) with dance choreographer Neo Jialing, where she explores the correlation between music and movement. Her most