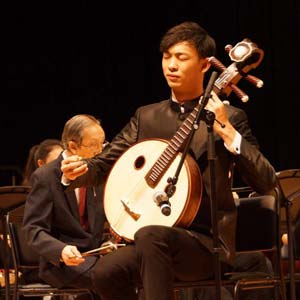 Wong Wai Kit began playing the Zhongruan at the age of 6. At the age of 13, he was under the tutelage of Ding Xiao Yan and Fu Yingying and currently under the tutelage of Han Ying, Ruan musician in the Singapore Chinese Orchestra. Wai Kit has also received tutelage from renowned Ruan Musician Feng Man Tian and also renowned musician and composer, Lin Ji Liang and also Dilin from Central Conservatory of Music. In 2012, Wai Kit got his first national award at the National Chinese Music Competition held by NAC, he was awarded second in the Youth Zhongruan Category. And in 2016, he competed in the National Chinese Music Competition again, this time in the open category. Wai Kit was awarded first place in the Open Zhongruan Category. In 2017, he then competed in the Nanyang International Chinese Music Competition in the youth high school open category and was awarded second with no first place awarded.

Along with all the solo competitions, Wai Kit has taken part in ensemble competitions also, namely with Toa Payoh West Community Center Chinese Orchestra, and NAFA Chinese Chamber. Notably, Wai Kit was a full time musician at Dingyi Music Company as a Ruan and Sanxian Musician. Also, he is an official Ruan freelance musician for Singapore Chinese Orchestra.

Aside from the Ruan, Wai Kit studied Orchestration and arrangements from Dr Zechariah Goh and Americ Goh during his degree program with Nanyang Academy of Fine Arts. On top of Orchestration and arrangements, Wai Kit was a conducting student of Lim Yau and Joost Flach. Wai Kit graduated from Nanyang Academy of Fine Arts, Royal College of Music Bachelor’s with Second Upper Class honours for music performance major in 2021.